It was a modest house in Makueni. Just a few rooms, a living room and a verandah where the man of the house would sit on a rickety wooden chair most evenings fiddling with an old transistor radio. The verandah faced the gate as verandahs should, otherwise they wouldn’t be verandahs now, would they? The man of the house liked his tea with lots of sugar. His tea tasted like Type 2 diabetes. Serah Mbole would serve him this poison of a tea. She was the househelp, as they were called then, before they became domestic managers. This was back in 1987 when school children drank free milk, the president carried a small rungu and there were no traffic lights. Or Twitter. She’d set the tea and thermos flask on a stool beside the mzee who would be bent over his radio searching, the aid of a knob, for KBC Kiswahili service. The air would be filled with static and expectations. The reception wasn’t good because the house was sort of in a small valley. Also, it was a very old Philips radio that looked like it had survived a few bombings in the second world war.

After tea was set for the bossman, she would recede into the house to continue with chores. Maybe she would join the lady of the house, Mama Teresia, in the kitchen outside to cook or clean a pot or cut onions. Or she would be behind the kitchen splitting wood with an old axe with a short wooden handle. The household had a litre of children; five of them. Before dusk she would wash their school uniforms and hang them on the long metal line that was tied between a stunted lemon tree and the pole of a fence. Weekends she would be up early to sweep the compound, gather the dead leaves at the edge of a fence and burn them if there was no wind. Then she would make tea from the three stones outside, eyes tearing from the smoke that seemed to love her.

Every night she retired to bed on a thin mattress and a thinner blanket in the kitchen not too far from the dying hearth. She always left the window open to bring in fresh air, and if the night was clear and she was positioned well, she could see the stars wink back at her. On most nights she would stay awake longer than everybody else, thinking, dreaming with her eyes wide open. She would dream of being wealthy, of wearing nice dresses – maybe kitenge, complete with matching headgear. She would dream of having her own home, a stone house, with a television set and a radio you didn’t have to slap to come on. And yes, a verandah that faced the gate. These dreams felt far and wild and often scary but they wouldn’t go away. They are the blanket that kept her warm when it became too cold in the night. They were her cloak of sanity even though they resembled a mirage.

One day she was out looking for one of the mannerless goats that had taken the habit of wandering out the boma when she ran into a girl who worked in the neighbouring farm. They chatted for a bit, standing next to a tall sisal plant that grew in a gulley that ran beside the road like a varicose vein. They were talking about money and dreams. Her friend mentioned casually that hotel work paid a great deal. Note: Hotels are what people in the 80s called cafes. Serah said, “Really? Better than housework?” Her friend nodded. In fact, her friend told her, she knew of a girl who worked in a hotel in town who mentioned to her that hotels were always looking for fresh girls to wait for. Serah was what you would refer to as a fresh girl. “You look decent,” her friend said looking her up and down, “you are beautiful. They will hire you.” Serah sighed and looked at the dusty main road that ran yonder next to a hill. With no education to speak she didn’t imagine that she would be anything but a househelp. The idea that she could go for another job never left her. She flirted with it. She tango-ed with it. She poked it like a dead animal to see if it would come alive. One day – as her dreams got more vivid, she said, hell with it – I will give it a stab. So the next time she was on her brief leave she slipped into her only dress, the one she occasionally went to church in and left for Machakos town.

The hotel was called Mwendando, or something like that. It’s been many moons, after all. It was a famous hotel. It was busy with men in hats drinking tea and eating chapatis speared by forks and women with well moisturised skins picking mandazis with the tip of their fingers. It had wooden chairs and tables covered by plastic materials. She walked up to the counter manned by, well, a man. Behind him a culinary bedlam ensued; frying and cutting and chopping and boiling and shouting, steam, smoke.

“Habari?” She told the man who was perusing through a receipt book.

“Sema,” he mumbled looking up. He had a nonexistent eyebrow, like he was scalded while trying to smell hot oil.

“We have enough servers,” he went back to his dog-eared receipt book.

“Where have you worked before?”

“Nairobi,” She had never set foot in Nairobi. Nairobi was a land of imagination, of hooting vehicles and crafty people of questionable repute. Nairobi was an incomplete dream in a complete sleep.

Anyway, she got the job. Her friend was right, they needed fresh girls and she was fresh. She got the job on the strength of her looks, she admits. She was a young girl with dashing looks. Everybody wants to be served by a dashing waitress. She went back to her employer and quit. It was about time, two years on that grind could break your back. She wasn’t going to miss that errant goat.

The small eatery turned out to be very busy. Her days started at dawn and ended after 9pm. She moved from table to table, placing all manner of dishes before all manner of customers: plates of mandazi, bald boiled eggs, sweaty fried eggs, stiffened toast, spotted chapatis, thousand cups of tea, karanga kuku and mayai, nyama fry, matumbo fry, ugali, mchele, maharagwe. She would fill salt shakers and hand over toothpicks and replace the soap at the handwashing station. There were people who were nasty and people who were kind. People who flirted and people who tried to sneak out without paying. There were people who smelled of flowers and those who smelled the back of donkeys. It wasn’t easy, staying on your feet for that long. “The job hurt your back and sometimes your ego,” she says.

At night, bone-tired, staring at the ceiling of a small room she rented in town, she still dreamt of owning her house, of being wealthy, of going for weddings dressed in her dashing vitenges, nails painted red, mouth like a cat that licked blood. The dreams wouldn’t leave her. She wanted more.

After a year or so, she changed jobs to another eatery called Kimakimwe hotel. Same working hours, same fair, some customers – only the furniture was better. She didn’t stay for long before she moved again to another hotel called Nofka hotel. She was now earning 20 shillings a day. The manager was this sweaty barrel-chested brute who always buttoned only half of his shirt’s buttons. Some folk don’t need all the buttons. His sideburns refused to grow well which made him look like a burglar. He never smiled and always sat in the corner – he also acted as a cashier – with a toothpick dangling from his unsmiling mouth. If Serah was late she was not paid her 20 shillings wage that day but was paid by a plate of githeri.

In 1990 she moved to Nofa hotel with all her dreams after which one time a potter from the market who was delivering produce to the hotel – tomatoes and the works – told her that the money was not in waiting tables but in selling produce. So she quit after a few months.

Her life in the market started in a place called Milimani. The porter introduced her to a trader who was bringing in produce from Nairobi – minji, marenge, ndizi, green beans. “I put in the business the little pillow savings I had and slowly it started picking.” After a few months she would make Ksh 2000 a day. She was balling. “But I had a dream remember, those dreams never died,” she says. “When your dreams die, you die. You continue living and walking and eating, but you are a shell.” 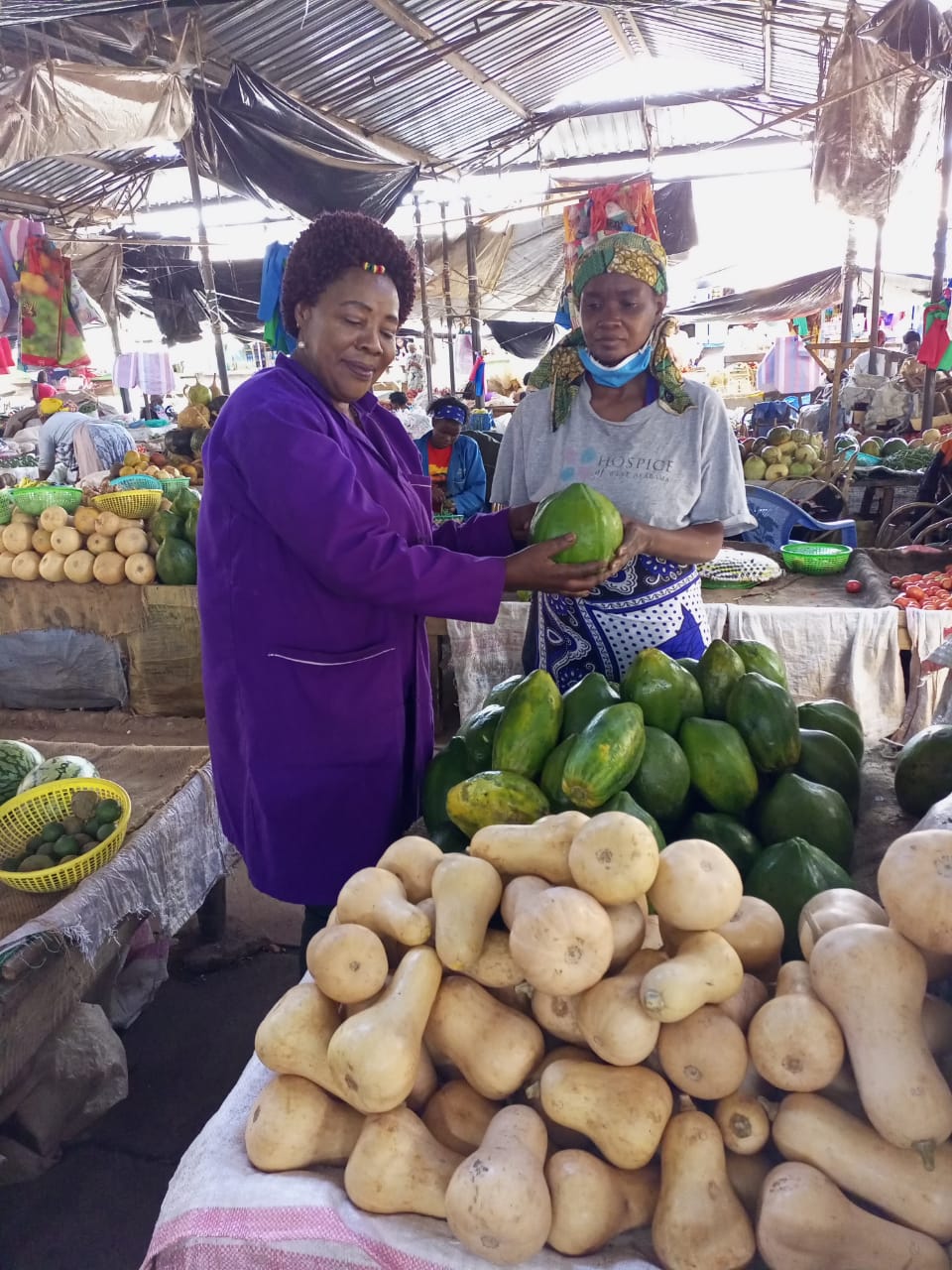 For the first time in her life, she did something she never ever imagined possible. She walked into the Postbank, Machakos branch. The year was 1990. The demolition of the Berlin wall was about to start in earnest. The UK and US were dispatching their troops to Kuwait. She stood at the counter and said, “I need to keep my money.” She had a bunch of folded notes stuffed in an old red purse. A bank official sat down with her and explained how this worked; you open an account called Save As You Earn which enables you to save over a period of time. We don’t give loans, they said. She filled out a form, she gave out her ID, she signed along the dotted lines, her first signature, and then she handed her money which was counted by someone in a suit and tie. It was the closest she had sat next to someone in a suit and a tie. She was earning sh 2,000 a month from which she saved half. Every month, without fail. She then joined a women’s Sacco where she would save some of her money. The more she made in the market as her business expanded, the more she would throw at the bank and at the Sacco.

Fast forward; 30 years later. Thirty-one years, actually. She owns a whole block consisting of 12 houses that she had built by 1998. She has tenants! Tenants! She has a duka where her daughter, who just finished class 8 runs as she figures out what she wants to do with her life. She has six kids, and her husband died. She also owns a bar which she opened four years ago. She had two bars before but Covid swept away one.

It doesn’t matter what you want to do, she says, you won’t achieve it if you don’t save. And it doesn’t matter how much you earn. “You will never earn enough to start saving, you will always be waiting for that big job to start saving but that big job will always be elusive. Start small, start today, start with little and grow it slowly, patiently.”

Whenever she sees a Postbank signage or logo she gets a warm feeling because she knows that they dropped the ladder for her to climb. “Start young, I tell any young person who is barely scratching the surface. Put your money in a bank that will take as little as Sh 200 savings because it’s not the amount that matters but the dream behind it.”

Visit any Postbank branch or agent in all the 47 counties to start saving today.