The first thing that stirred her was her upbringing, growing up like an Indian; in a knot of relations. In an old four-bedroom mansion in Parklands with big windows and a restored roof. A house with an old carpet with a story of itself, strong backed chairs with minimal studious cushioning, a consoul where all manner of keys are dropped after a brutish day, a house that smelled of incense – lavender or sandalwood -, where the tv came on just before dusk with a program mostly featuring a hapless daughter-in-law locking horns with a mother-in-law; Kudhali Bhagya, Kasauti Zindagi ki, Saath Nibhana Saathiya. A home where children’s laughter rose to the ceiling, above the aromas of khichdi, thepla, dal dhokli, khandvi, coming from the pot stirred by either a sister-in-law or the matriarch. Where often someone lit the Aarti, for wealth and prosperity, and watered a money plant for business to flourish. Where they gathered at meals, a light chatter bubbling from the energy of the dining table, tinkering of cutlery, sometimes an admonishing adult voice hissing at a child to finish their food. That was Sheena Patel’s ecosystem of uncles and aunts and sisters-in-law and cousins and mom and dad.

The other thing that stirred her life was Kerugoya where she spent most of her holidays whenever she visited her father who sold alternators, radiators, suspensions, oil filters and stuff, in an automotive shop. They lived in a stone house with a massive grassy compound that neighboured a farmer. There were many trees, gathered and growing together like her family back in Parklands. Like her life, she marveled at the camaraderie of nature. When the day was clear and the air was crisp, she would see Mt Kenya if she stood at a vantage point. She rode bicycles and fell off them, scraping her knees and hands; keeping scars for future tales. She remembers the sound of the rain drumming a relentless tune on their corrugated sheets like someone practicing to play music. There was the distant sound of wild dogs in the night. Of cows mooing. When it rained it rained hard; trees swayed like waving lovers. The environment was wide and wild – well, sort of. No walls were closing in on them, no car fumes chasing them, just the sound of birds and animals in the brush.

There were massive chameleons, monkeys and many snakes. One time she fell on the bike and in the bathroom tub where she went to fetch Dettol to dab on the wound, she stepped on what she thought was a  water pipe, but that was actually a snake. When she would get older, she would be back here with her friends, camping, hiking, feeling nature. There was always tea in their house made by her mom, the Indian way; grated ginger, boiled in water, added tea leaves and milk and sugar. It was strong. It filled your mouth with aroma and personality. And because it was special they had it once a day, in the morning, fuel for a day running wild.

Unknowingly she was also stirred by her father’s work ethic; he rose early at 8am had a strong cup of tea and went to work and by 6pm, like clockwork he was back in the house. He hardly ever fell sick. He respected his work.

She wanted to draw, to be a fine artist but her parents wanted her to be something else; someone in IT, because, well the world was changing, computers were taking over. She – already seduced by the free world that nature provided – hated the idea of sitting before a computer all day, coding, clicking. She decided to study and do graphic design, which she did for 12 years – working on major brands. There are nights during that time when she worked late on client briefs, in the middle of the night, a cup of her tea at hand to keep her company. She would take 20 cups in a day; masala chai, herbal tea, tea with milk, tea without milk. But it wasn’t good tea. It couldn’t be good tea when it wasn’t the tea she took in Kerugoya; that sweet and strong tea with an aroma that always tempted you. This tea was the remnants after the good tea was exported abroad; it was mainly fibre that emitted that strong colour but without the taste. Eventually her career hit that proverbial glass ceiling and realised there was nowhere else to go. That a female graphic designer wouldn’t be paid as much as her male counterparts.

When she told her dad that she had quit her job and wanted to get into business, he asked, what business and she said, ‘tea business.” She wanted to replicate her childhood that was stimulated by all these beautiful experiences; the smell of freshly cut grass in Kerugoya, the colourful insects on trees, the clear blue sky that seemed to emit its own earthly aroma, mama’s beautiful tea that she drunk from a cup held jealously by her two hands. She wanted to put all that experience in a bag and then stir it. But also, she had just lost her son not long ago and she was back to Kerugoya because when you are at your lowest, you want to sit at the very feet of your parents, of what feels like home. And during this time of great depression and pain, she started dreaming up her new business, the phase of Stir Me Too was then spurred from that place of emotional conflict. 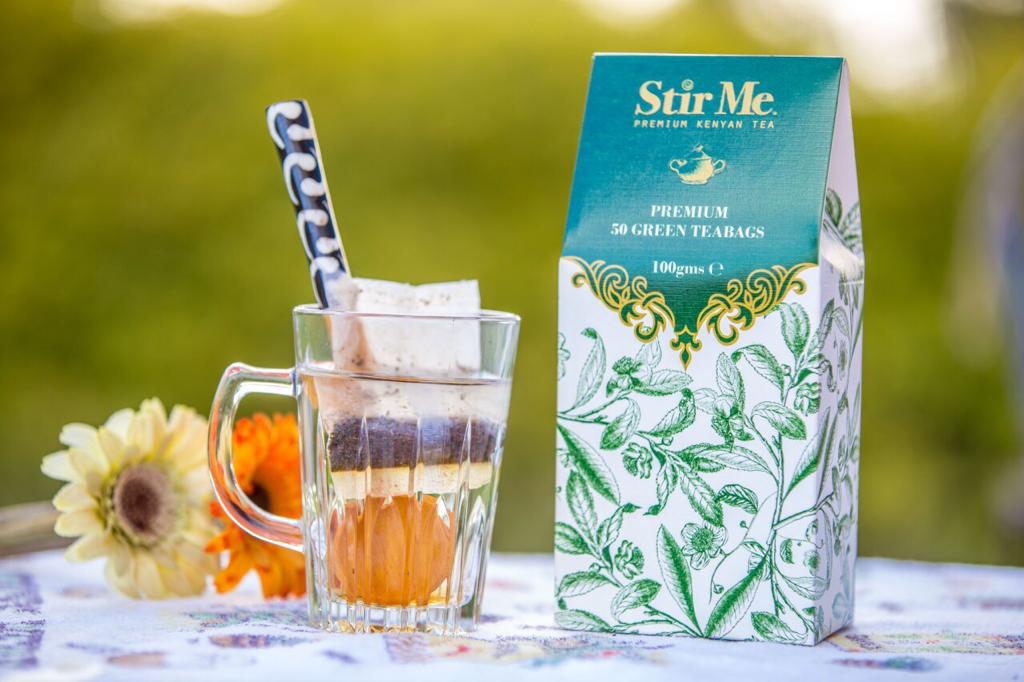 So she started Stir Me Tea because often one has to be stirred for their true character to come out. Because the density of your life’s worth sometimes settles at the bottom, a place you long forgot and only stirring it can create that balance again. The sum total of her work now has been a blend of all her experiences. Running around wild made her appreciate the freedom that now lands on her cup; the freedom to create something that has a bit of her in it. Her decade plus in the trenches of graphic design now lives in the designs of all her teas collection. Because it’s time tea stopped being boring. Everything that stirred her now lives in sachets; green, purple, zingy mint, earl grey, purple exotic, masala, zafrani chair, turmeric chai, mango mania, hell, she even has gin and tonic tea that tastes like gin and tonic but has no alcohol in it. She’s now the girl who makes tea. A girl stirred. 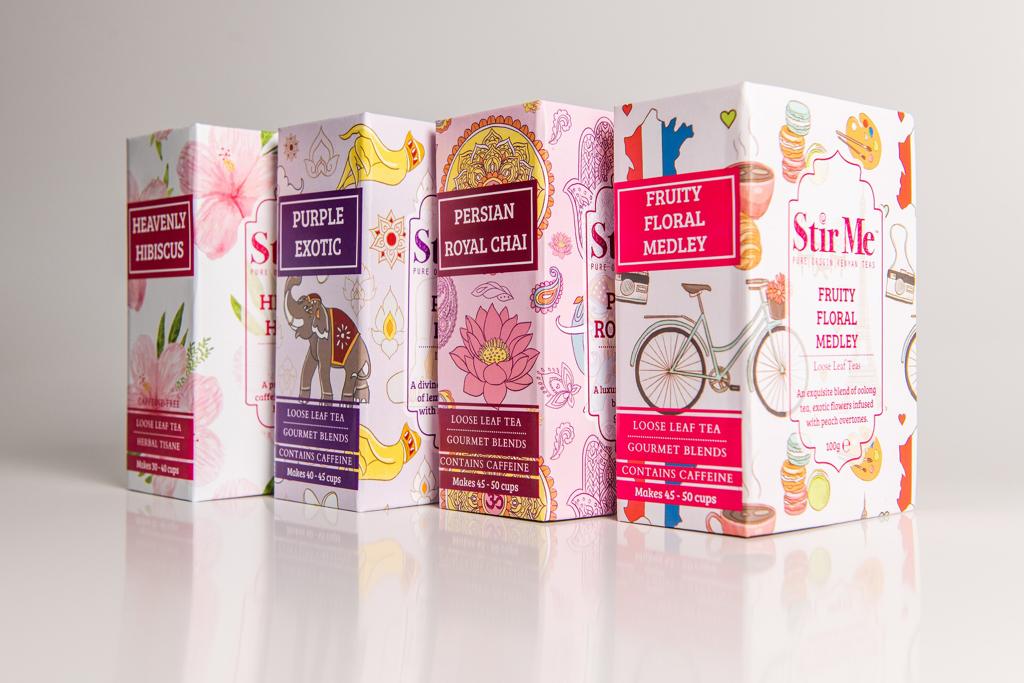 Stir Me is a member of Visa’s small business Hub. #WhereYouShopMatters