I knew nobody would believe me if I told them I saw Samuel L Jackson at the airport. So I walked up to him and said, “Samuel L Jackson, I’m a big fan. I love all your movies, even ‘Shaft’.”

He looked at me through his sunglasses and growled,” What’s wrong with ‘Shaft’, matha’ka?”

“The lines you say there are unbecoming of your talent,” I said.

“What lines?” He moved closer to me. He smelled of old cheese.

He grinned and shifted his weight on one leg like he likes doing. “Well yeah. They made me say that. Plus it was 2000. Who knew better in 2000?”

“Headed to the Mara?” I said, “I love your Maasai disguise. I couldn’t tell it’s you.”

“Yeah, I’m told lions fear Maasais. They see them, they run. Oh I fear lions. I don’t mess with those maaf***as.”

We talked about movies for a bit. I asked him about Hollywood, if he has ever met Toni Braxton in person. “How is she in person?” I cried like a teenager, “Tell me, tell me.” 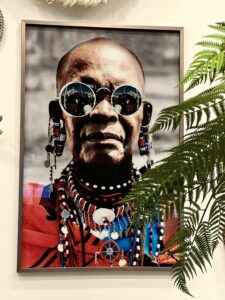 Chastised, I went and bought a hot dawa and sat next to Davies, the Director of Photography for the gig we are doing with Singleton. We got talking about the holidays which drifted off to talking about children. “This was the first Christmas holiday I took time off in five years,” he said.

“Yeah, the other option is for them to see you yet can’t provide for them,” he said. “That’s even tougher.”

“Then you die,” I said. “The trick is to find your joy between the death and the work.”

He grunted and sipped his coffee contemplatively.

“My daughter is turning 15 the day after tomorrow,” I said to change the subject. Well, not entirely.

“Moody. Mysterious. Silent. Ignores me more and more,” I said sadly. “Doesn’t hurt me. At all.”

He laughed at the sarcasm.

“Yeah. I still have more kids in me.”

I laughed at that. More kids in me. It’s like they are eggs.

“What happened to the old wife?” I asked.

“How old were you? When she died?”

We remained silent. I wanted to ask him if she comes in his dreams sometime but I couldn’t. You think you know someone. I mean, he’s always so jovial, so friendly. To imagine he has lost a wife and he carries grief with his camera. 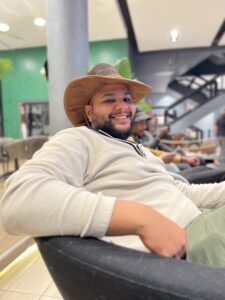 I stared at the trendy Anthony Ogega or Andere and his white hat across the room. He’s the project’s Steadicam operator which is this cyborg-like camera you wear on your body. You need massive arms for that shit and all Andere seems to do in the gym is work his arms. He also has a tattoo of a film roll on his leg. 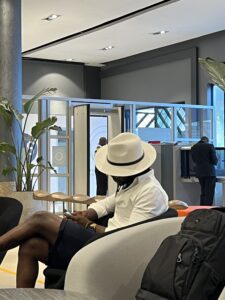 In Kilifi’s Vipingo Beach Club I ordered an iced-tea but what came was strungi and ice. It felt like drinking a dirge. Heat rose from the sand and the sun pressed down on our heads. 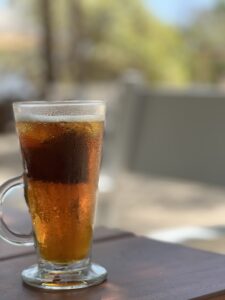 I interviewed a gentleman who would fly off a small plane and jump off at 12,000 ft.
I later heard Zainab speak to someone. She owns the first ever skydiving Dropzone in Kenya- a Kenyan, and a woman. I said, “hey, I write for the Business Daily, would you like an interview?” So we sat down somewhere and we talked about fear for thirty minutes. Fear for the future. Fear for ourselves. Fear of ourselves. Fear of our pasts. And at some point I asked a question that opened a pandora’s box and I saw pain in her eyes and it made her human, not this kickass woman who has jumped off a plane thousands of times. 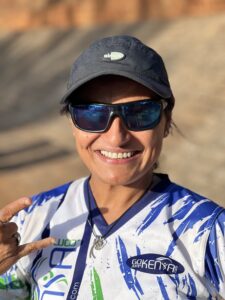 I later found a spot under a palm tree and hydrated. I called Duncan, my landscaping guy and asked how the new Shamba boy was settling in. I fired the old one. Cleaning house, leaving all bullshit in 2022. I’m on my, what, fourth Shamba boy. The last one, who I liked, started imagining we were peers. He started drinking my whiskies I’d leave behind in shags. Then he started messing with my grass. Nobody messes with my grass. In the words of Samuel L Jackson, “don’t mess with my grass Maa***ka.” Duncan got me a new guy, a 22 year old chap who looks like a Genge-tone artist. He’s also 6’2″.

Later we went back to Vipingo Ridge and hung our hats. I saw two giraffes on a date. I then went for a swim. Then had a fantastic salad later at dinner at the clubhouse. 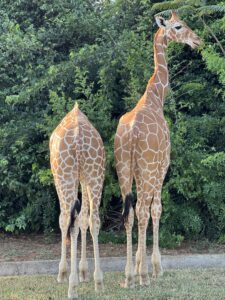 Later, I set off for my room. I needed the walk. It was dark and silent and the green grounds rose and fell like a rumbled blanket. That’s when I stumbled upon the burning tree. I don’t mean to imply that I have one up on Moses and his small burning bush because this is not a competition, but I know what I saw and what I saw was a burning tree. 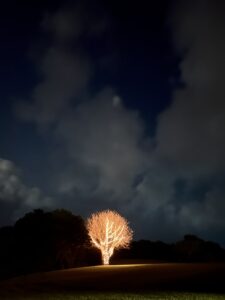 I stopped in my tracks and stared at it. I waited for a booming voice. A voice that commands me not to go any closer. Instead what I heard was the hubbub coming from the clubhouse.

“Lord, say something!” I said.

“Lord! Please! This is not funny!” I shouted at the burning tree.

So I raised my phone and took a photo, something Moses would have done and posted on his social with the caption, “Pharaoh, I’m coming for my homies.”

I then went to bed.

Let’s get this year started.